Today we released the version 0.26 of our general-purpose linear-algebra crate: nalgebra 🎊

The version 1.51.0 of Rust has been released three weeks ago. That version stabilized an MVP for one of the feature we wanted the most: const-generics. Const-generics allow you to define types parametrized by const integers, chars, or booleans. One iconic example is writing a structure wrapping an array of any size:

This change results in significant ergonomics improvements when using statically-sized matrices or vectors:

Using nalgebra for generic programming with statically-sized matrices/vectors/points was quite challenging before. Let's take a simple example of a generic structure that wraps a point, a vector, and a matrix and performs some kind integration using 64-bit precision. In previous version of nalgebra this would look like this:

See all the DefaultAllocator: Allocator<...> trait bounds? They are here to help the compiler deduce the proper storage types for the matrix/vector/points (i.e. to deduce the GenericArray with the right dimensions).

Now that const-generics have been integrated to nalgebra this code becomes as simple as one would expect:

See that there isn't any DefaultAllocator: Allocator trait bounds whatsoever.

Now, keep in mind that these simplifications will only work if you stick with entities with dimensions known at compile-time. If your code needs to work generically for both statically-sized matrices and dynamically-sized matrices, then the DefaultAllocator: Allocator bounds are still necessary (we should be able to get rid of them too once specialization is stabilized).

This one is a life-changer for those relying extensively on debuggers. Until now, inspecting with a debugger the content of statically-sized matrices or vectors (or points, quaternions, etc.) was extremely difficult. This was caused by the smart, but complicated, recursive definition of GenericArray. Here is what inspecting the content of let matrix = Matrix2::new(1, 2, 3, 4) looked like (in CLion's debugger, using the Rust plugin): 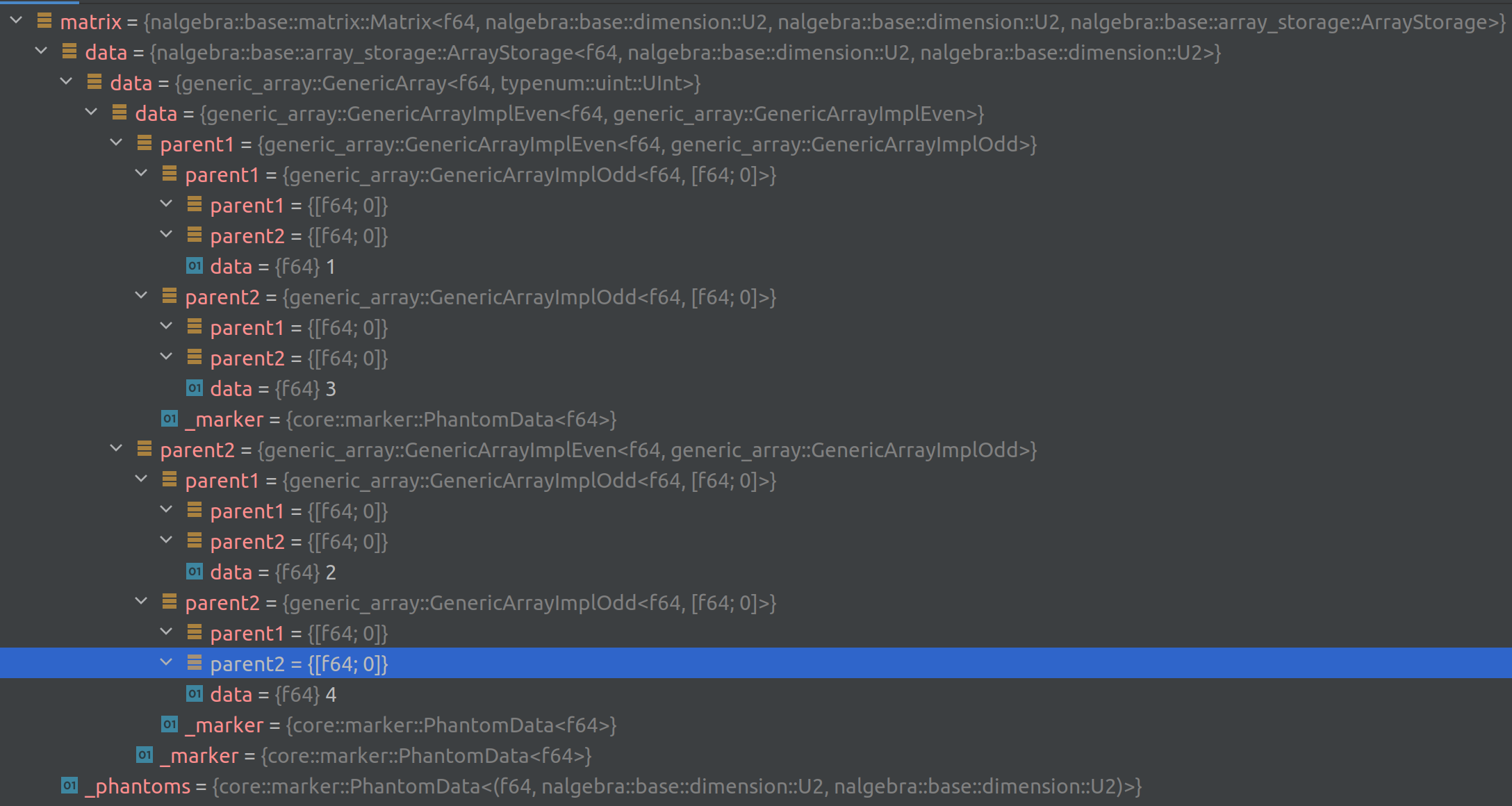 Here is what it looks like now that we replaced GenericArray by standard arrays:

This is much clearer now. Keep in mind that nalgebra stores its matrices in column-major format. That's why the components appear in the order [[1, 3], [2, 4]] (column by column).

Now that small matrices are using standard arrays under the hood, it is now possible to define constant vectors, matrices, points, quaternions, and translations by using their const fn new(...) constructors:

Everything in nalgebra ends up being expressed as a matrix, in one way or another. Even a vector is just the Matrix type setup to have only one column. This is why we have so many type aliasses like Vector3 which is an alias for a matrix with 3 rows and one column.

All the aliases for specific dimensions (e.g. Vector3 for 3D vectors) remain unchanged.

Limitations: why typenum is still needed#

We no longer use the generic-array crate, but you will notice that nalgebra continues to depend on the typenum crate. This is needed because const-generics support on Rust 1.51 isn't complete yet, and doesn't allow operations on the const-parameters like in the following push method that adds an element to an array:

In order to overcome this limitation, we have to rely on typenum by converting the integer to a type-level-integer, performing the operation with typenum's type-level operators, and then extracting the result as a const value. This roughly looks like this:

It's actually less verbose in nalgebra because we have some additional traits to hide some of the complexity going on here. But the fact remains that without more advanced const-generics support from the compiler, methods like this push will be more verbose to define, and will be limited to the values of D (currently the values in [0, 127]) such that Const<D>: TyTypenum is implemented.

The const-generics MVP allowed us to significantly improve the ergonomics of statically-sized matrices and vectors. However, we are still waiting for two features to land to make nalgebra much nicer: