In our announcement last week, we briefly mentioned this new physics engine we have been working on during the past 5 months. Today we are officially releasing it for the first time: the project Rapier; a set of two 100% rust libraries rapier2d and rapier3d for 2D and 3D physics simulations for games, animation, and robotics.

This post will be quite long, so here are all the different sections:

Rapier is the successor of nphysics and focuses on performance first. Just like nphysics it is split into two crates: rapier2d and rapier3d for 2D and 3D physics respectively. It is designed to be fast and multithreaded right from the beginning. It is also designed to require less incremental compilation times because the data structures it defines are not generic.

In release mode, Rapier runs 5 to 8 times faster than nphysics , making it close to the performance of (the CPU version of) NVidia PhysX and slightly faster than Box2D as you will see in the benchmark sections. Rapier is only at its beginning, so many features are still missing. However some performance optimizations like parallelism, and SIMD have been integrated right from the start.

There already are a few key features that makes Rapier stand out. Since they may affect compilation times and/or performance, they are disabled by default and need to be enabled explicitly through cargo features:

See that section for a comparison between Rapier and nphysics features.

Reaching out to other communities: Bevy and JavaScript#

Writing a physics engine is hard. There are not a lot of choices out there and most of them are written in C++. With nphysics we wanted to provide an open-source 100% rust physics solution for the Rust community. With Rapier we want to go one step further by contributing to as many communities in need of a physics engine as we can. This is why we are starting, right at the beginning of the Rapier story, by providing:

There are so many more communities we would like to contribute to but don't have manpower to support all of them just now. Other integrations and languages will come in the future.

We also plan to create official plugins for the Amethyst game engine but have not started yet. We are waiting for the migration of Amethyst to the legion ECS solution before starting to work on this.

Examples using the 2D JS bindings are available on GitHub: 2D and 3D. You can see these demos running there for 2D and there for 3D. In these demos, the physics simulation runs inside of a web worker and the rendering is performed by PixiJS and Three.js.

Today nphysics is more mature than Rapier. Our first goal during the next few months is to bring Rapier at the same level as nphysics featurewise, while keeping the significant performance improvements and better accuracy.

Alright, we claimed that Rapier is nearly as fast as the CPU version of PhysX, 5 to 10 times faster than nphysics, and slightly faster than Box2D. It is now time to prove these claims using benchmarks.

Keep in mind that Rapier is still at a early development stage. It does not have as many features as the ofther physics engines involved in this benchmark. However, our objective is to ensure that the future addition of new features to Rapier don't reduce the level of perfomance you see here.

In the subsequent benchmarks we ran a set of stress tests using four different physics engines:

Independently of the chosen physics engine, all scenes are always initialized in the exact same way (same bodies, same colliders at the same initial positions) and with the following parameters:

Each 3D benchmark is run on two different machines because we observed performance differences between PhysX and Rapier depending on the processor:

The 2D benchmarks are run only on the AMD Ryzen 9 3900X CPU (the relative performance remain the same with the Inter Core i7 CPU).

The PhysX benchmarks will include two performance curves:

In this benchmark there are 8000 balls falling on a ground also composed of balls. In the end, they form 400 independent small stacks of balls.

In this benchmark, there are about 3000 small cubes falling on a large cube floor in a completely unordered way.

In this benchmark, there is a set of 4900 boxes falling in such a way that they form a single large pyramid in the end.

In this benchmark, the floor is modelled as a triangle mesh composed of 800 triangles. There are 1500 small boxes and 1500 small balls falling on this mesh.

In this benchmark, 5230 rectangular rigid bodies are used to form a tower, much like what can be achieved with real-world KEVA wood planks. During the simulation, the tower breaks down to end up with a large pile. Note that the tower breaks down because only 4 velocity iterations are used for this simulation. With about 15 velocity iterations, the tower would remain stable when using Rapier.

In this benchmark, we have little less than 20.000 ball joints (aka. spherical joints). These joint connect rigid bodies in such a way that we end up with a single large fabric-like sheet.

In this benchmark, we have 20.000 fixed joints keeping all balls from moving wrt. each other. 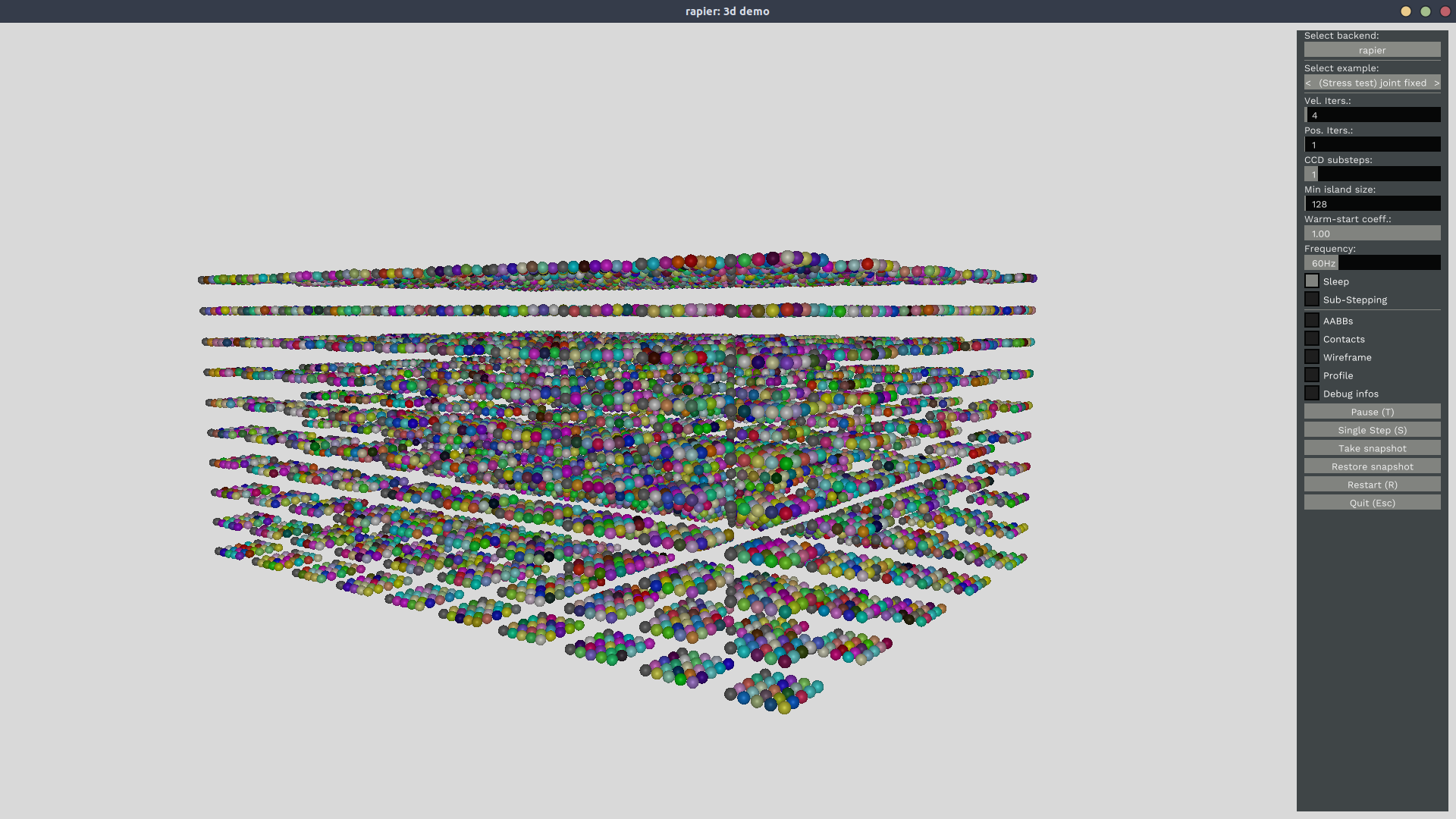 In this benchmark, we have 8.000 revolute joints attached in a way that forms several independent chains.

From these benchmark we can see that:

In this benchmark there are 12.500 balls falling on a ground composed of balls. 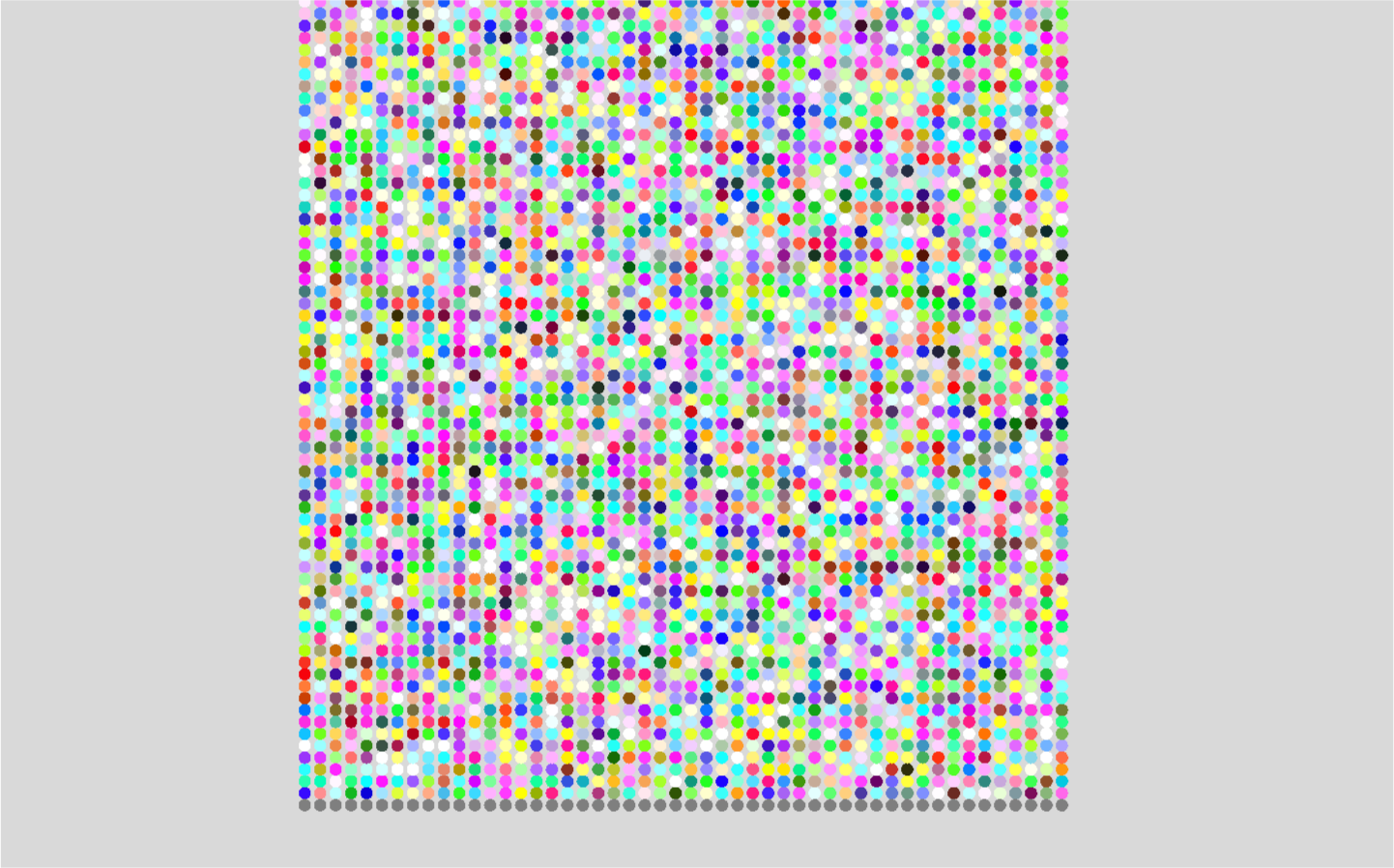 The Box2D times are very noisy here. We suspect this is caused by their broad-phase implementation.

In this benchmark, there are about 3.380 small cubes falling on a large cubic "cup" in a completely unordered way. 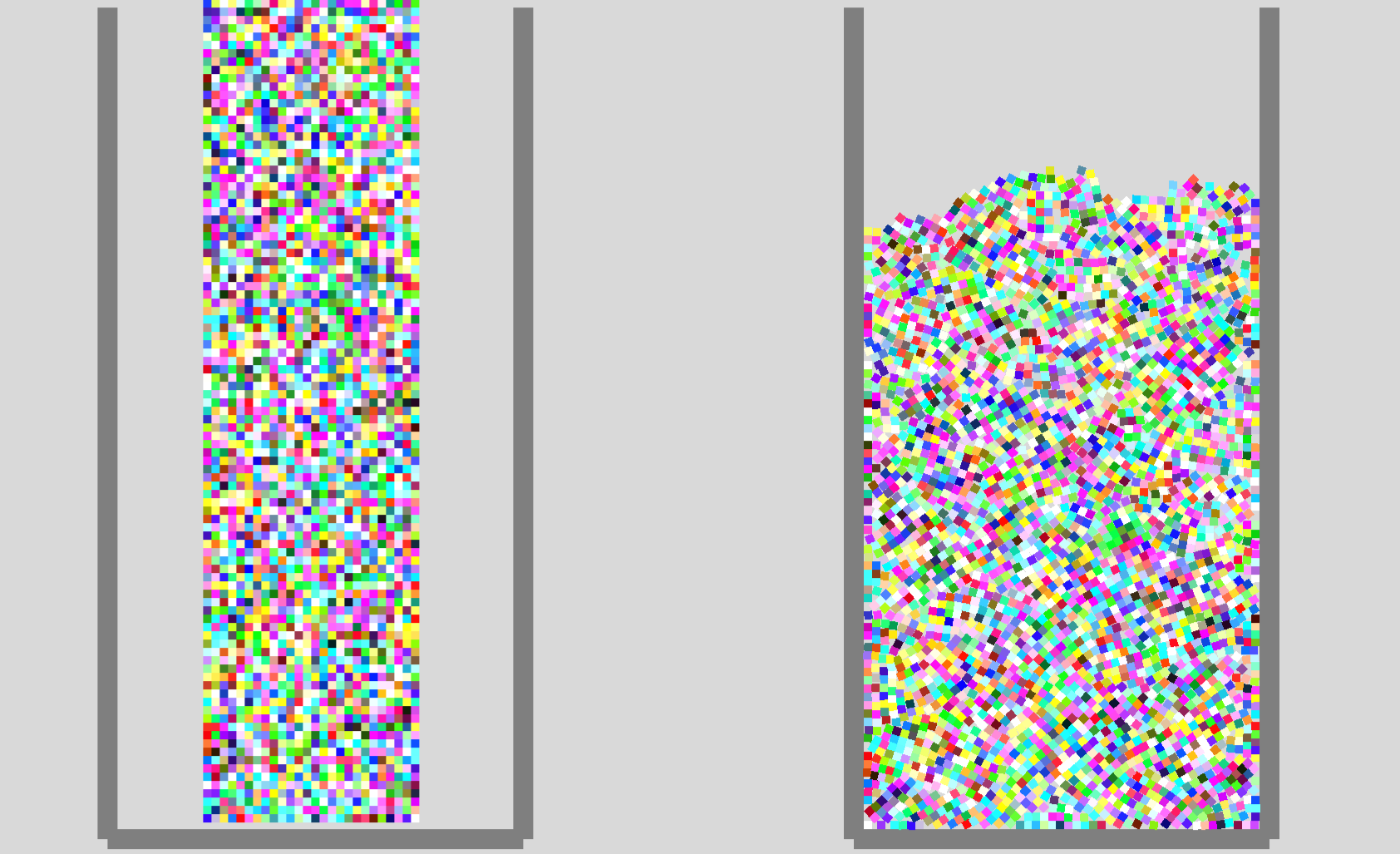 In this benchmark, there is a set of 5.050 boxes falling in such a way that they form a single large pyramid in the end. 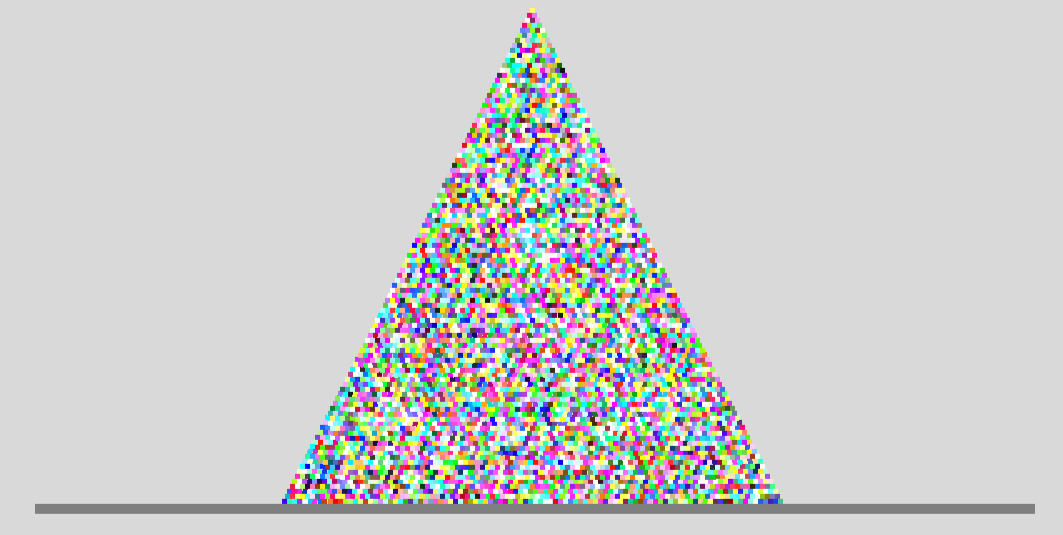 In this benchmark, we have little less than 20.000 ball joints (which are the same as revolute joints in 2D). These joint connect rigid bodies in such a way that we end up with a single large fabric-like sheet. The performance of Box2D go really crazy on this benchmark because its simulation breaks down (lack of numerical stability). 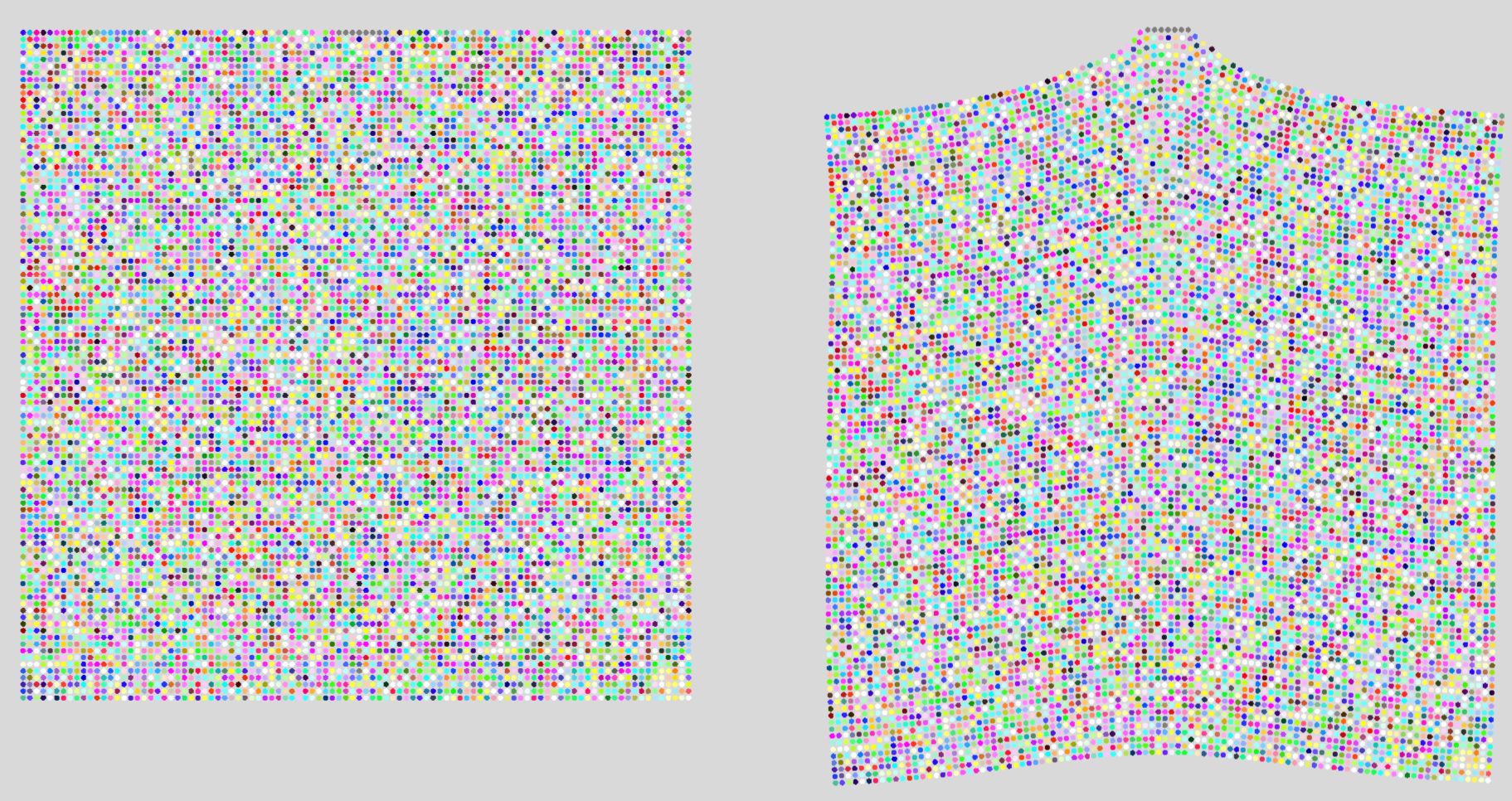 In this benchmark, we have 28.840 fixed joints keeping all balls from moving wrt. each other. 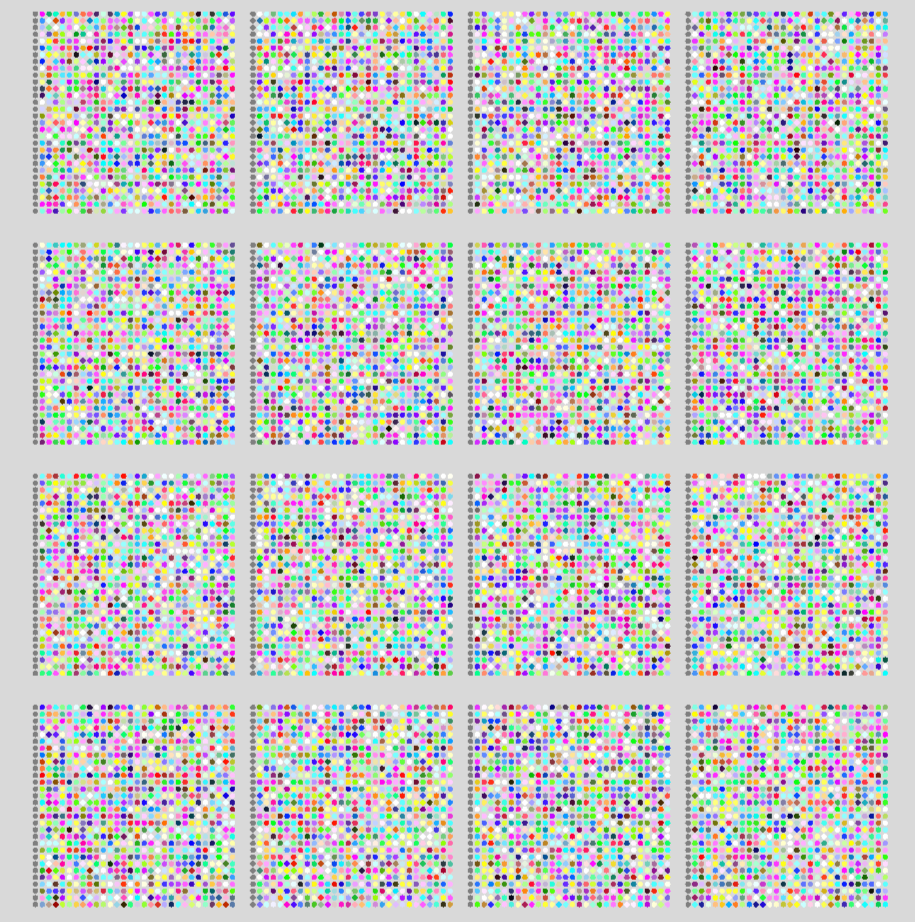 In this benchmark, we have 12.500 prismatic joints attached in a way that forms several independent chains. Lower joint limits have been enabled.

From these benchmarks we can see that.

Running the benchmarks yourself#

If you would like to see how these benchmarks perform on your own computer, you may run them manually:

The benchmark will run and the outputs will be writen as CSV files created on the current directory. There will be one CSV file per simulated scenario. A CSV file will contain multiple columns, one per running physics engine.

The development of Rapier started only five months ago and already shows very promising results. Its performance make it a great 100% Rust alternative to PhysX as long as you don't need a GPU-based solution. For 2D it is often slightly better than Box2D performance-wise, but it still lacks some features to be able to completely replace it. Compared to nphysics, Rapier is at a whole different level both in terms of performance and joint constraint stability. Finally, thanks to its JavaScript bindings, Rapier is both the most efficient and numerically stable Web physics engine available on NPM.

During the next ~8 months, our goal will be to implement in Rapier all the features that currently exist on nphysics, including CCD, reduced-coordinates joints, and soft-bodies. If you need some specific features (even that did not exist on nphysics), please feel free to contact us.

If you would like to support us with the development of Rapier, please consider sponsoring us on GitHub sponsor.

Thank you for your support!